Bringing you friendly thoughts, reviews, and tips from the big screen to yours

Welcome to the inaugural Re-Screen, a weekly subscription box* of films curated just for you**.

Every week will feature one or more double features which you can watch any day you please, we’re not your parents, do what you want.

Our selections will run the gamut of genres and eras, so there is sure to be something for everyone***.

Subscribe now to the right (laptop) or below (mobile) to get two weeks of curated movies free!****

*This is not a real subscription box so don’t expect anything in the mail. The normal mail will still run obviously, we don’t control the post office. **It is the same selection for everyone, so this is more like a royal-you situation. ***Except for horror fans. Listen, I’m doing the selections, and I’m a scaredy-cat. ****It’s always free. I mean hey, my Venmo is open, but you can read these anytime you want. Also you don’t have to subscribe to the email list but it’d be swell if you did.

October. What better time to Fall in love. This first week is all about the special feelings that are felt between a family, old friends, a house and its owner, or a man and his imagined daughter.

Men and women can’t be friends. But disembodied hands can.

There is a spark in Gomez Addams’ (Raul Julia) eyes when he looks at Morticia (Anjelica Huston) that convinces you he may actually be in love with her. The Addams Family is mostly silly and fun, yes. But there is something more to be found in the chemistry between the married couple. They are not just in love – they adore the very idea of the other’s existence.

Directly opposite of Morticia and Gomez are Harry (Billy Crystal) and Sally (Meg Ryan). Devotion rules the former couple; denial, the latter. Harry denies his emotional needs while Sally denies her vulnerability. Neither can accept the importance of their relationship to others. They cannot be in love because if they were they would have to admit they were important beyond their own conception of themselves.

Losing a loved one and the home.

This is a pair of strange little movies. Monster House used the same motion-capture tech as The Polar Express and was one of the few films that was truly meant to be seen in 3D pre-Avatar. 10 Cloverfield Lane started out as a kidnapped-in-a-bunker movie before being bought by J. J. Abrams and turned into an entry in his Cloverfield monster-movie franchise.

Both films rely on their antagonist’s loss of a loved one and how that effects their relationship to their home. Mr. Nebbercracker (Steve Buscemi) desperately wants to let go of his lost love. Howard (John Goodman) is willing to do quite literally anything to recapture what he has lost.

Some people are just destined for more. Be that the avatar of a different holiday, a broadway star, a football player or a rocket scientist, this week is all about folks who aren’ t satisfied with their lot in life.

Wanting it all, and betting they can improve it too. They know exactly what they’ll do! 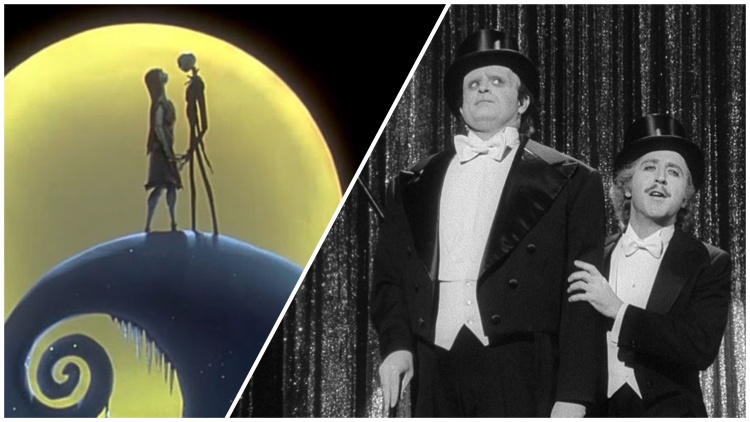 The Nightmare Before Christmas (1993) and Young Frankenstein (1974)

Jack Skellington (Danny Elfman) and Dr. Frederick Frankenstein (Gene Wilder) wish deeply for their lot in life to change but are undone by their shared sin: hubris.

Tim Burton’s stop-motion animated classic has lingered in the public conscience for 26 years. In addition to providing Disney/Hot Topic their merchandise from September through October, it has prompted an eternal philosophical question:

Is this a Halloween movie or a Christmas movie?

After much deliberation, I’ve decided it doesn’t matter at all. I’ll throw it on the calendar twice if I want to, it’s my list, and it’s a fantastic movie. Danny Elfman’s score and his performance as Jack both hit these discordant notes that build on the fever overtaking him.

With all due respect to the Pumpkin King, only one does it better: Gene Wilder in Young Frankenstein. While mostly remembered for being astoundingly funny, I think the deeper tragedy felt by the grandson of the famous Dr. Frankenstein is often looked over. Wilder captures this conflicted sadness-of-fame much as he does in Willy Wonka & the Chocolate Factory, filling the performance something akin to a depressed madness.

In this life, they don’t have to prove nothin’ to nobody but themselves.

This is easily the best paired double feature this month. The movies are close enough that it almost plays like Mad Libs:

Rudy (Sean Astin)/Homer (Jake Gyllenhaal) wants a better life than his steel mill worker/coal miner father has imagined for him, so he looks to Notre Dame/rocket science  as the pathway out, with the help of his tutor/teacher, Jon Favreau/Laura Dern.

That’s not to say that they don’t have something unique to say between them. Rudy, beloved stereotypically as “that movie that your dad cries at,” focuses on the idea of “that one single moment.” If Rudy can play just one single down of football for Notre Dame, his life will have been changed. He will have proved to himself that he could do it, that he could be more.

October Sky, best known as that movie that your math teacher definitely showed you if you were in school at any point from 2000 on, is all about living up to your full potential. Homer is destined for much more than the coal mines. He just needs the support to get there.