Bringing you friendly thoughts, reviews, and tips from the big screen to yours

Given my youthful, some might say babyfaced appearance, it would be easy to mistake me for being hip with all the new trends. However, my true understanding of internet/pop culture is shaky to say the least. Basically, I look at memes, fidget spinners, and dabbing the way my grandmother looks at any TV remote manufactured past 1990. I just do not get it.

Enter Arms, next in line after Zelda and Mario Kart designed to be a system seller for the Switch. It’s a fighting game where boxers with springy appendages duke it out with a diverse arsenal of boxing gloves so zany, they might’ve been stripped from Wile E. Coyote’s personal Acme collection. During my hour of playtime I had while the game’s open beta was running, I was confused, lost every match I played, and looked like an idiot while playing. But I still wanted to play more. I just do not get it.

The beta, or more appropriately titled, Global Testpunch, lets players test out the game’s core mechanics in a multiplayer ‘Party Match’ mode while develops make sure the servers will be up to snuff for a worldwide release.

Initially, loading up Arms will throw you into a surprisingly brief tutorial that explains the odd, but strangely intuitive motion controls that are supposed to be the primary method of piloting your boxer. It’s just enough of a taste to make you go “Huh?” before being tossed into a match against another human. To boil it down, tilting both of your hands simultaneously in any direction while holding the Switch’s Joy-cons in the ‘thumbs up’ position will get your boxer to shuffle around the arena, and physically punching with your individual hands will translate to your fighter throwing left and right hooks. Imagine holding a pair of Microsoft Flight Simulator joysticks in each hand while playing Wii Sports boxing and you’ll kind of get the idea.

For traditionalists out there, you can also play the game while using the more generic controller configuration, but I against every fiber of being in my body, and God almighty it hurts to say it, I got the feeling that using motion controls seemed to be a more natural and an easier way to play. Punches flew off the handle quicker, moving proved more agile, and the buttons I needed to jump and dash were conveniently located by either one of my opposable thumbs. I can’t say that I won more multiplayer matches while playing with motion controls, or that either motion or standard controls are perfect, but I can say that I had a better time this way.

The real twist that I was not expecting from my test run with Arms was how much I would enjoy the matchmaking system that was the basis for the Party Match mode. Historically, Nintendo has not been the premiere provider for a multiplayer gaming experience. My time with Mario Kart 8 online with the Switch has been mixed to say the least. However, Party Match mode has shown some promise. In this mode, Arms connects up to 20 players, puts them into a room, and divides all of those players into an assortment of 1v1, 2v2, 3vCOM, and free-for-all matches that only last one to three minutes a piece. My first match in the lobby would have me dueling with one player only to be teamed up with that very same player three matches later, against two new competitors. 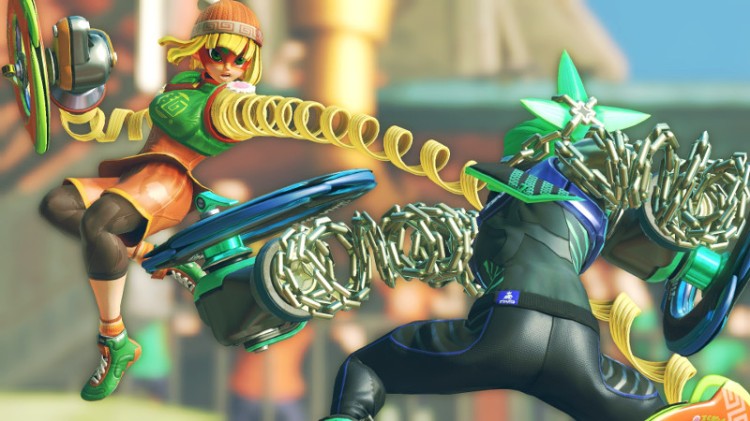 When not currently active in a match, the game will give you a few simple diagrams to show which players are currently facing off in what matches and also shows off health bars so you can see the status of a fight. Winning (and in my case, participating) in matches will award coins to fighters, which will be tallied next to each player’s name in the lobby. More coins next to a name translates to better performance, making it easier to pick out the heavyweights in your group.

The quick and simple matches of Party Match mode give a smooth rhythm to the experience and make a win sweet and a loss forgettable.This generates an attitude better than most typical fighting games where a brutal defeat is less likely to result in a rage quit.

But even after all my hard losses to better competitors, it was hard to get mad given the way the game’s amazing art direction always made me smile. It’s half retro-future boxing mixed with half masked lucha libre. All of the boxing rings and boxers are decked out in vibrant yellows, reds, and blues that are blend so well with the fast paced action.

It’s a rare treat these days to see a game so innovative in design and gameplay that is also coated in a sparkling polish. Arms continues to show that Nintendo can be itself and create a brand new, fun filled world for players to battle in. Though I believe myself to be defeated by players that clicked with the game before I did, the bell has rang, and I am out of my corner ready for fisticuffs in round two with the full release of Arms on June 16.